92.5% of Swiss respondents said that they experienced late payment in 2018. This is one of the highest percentages next to that of Austria and Belgium.

Despite the 2018 decrease, at 92.5%, the percentage of respondents who experienced late payment in Switzerland is still one of the highest in Western Europe. Top reasons for payment delays are insufficient availability of funds and buyers using outstanding invoices as a form of financing. The proportion of past due B2B invoices is stable compared to one year ago but significantly above the regional average. In order to manage the impact of overdue invoices, 23.0% of Swiss respondents had to take specific measures to correct cash flow and 19.3% had to postpone payments to suppliers. For 21.4% of survey respondents, overdues led to revenue loss. 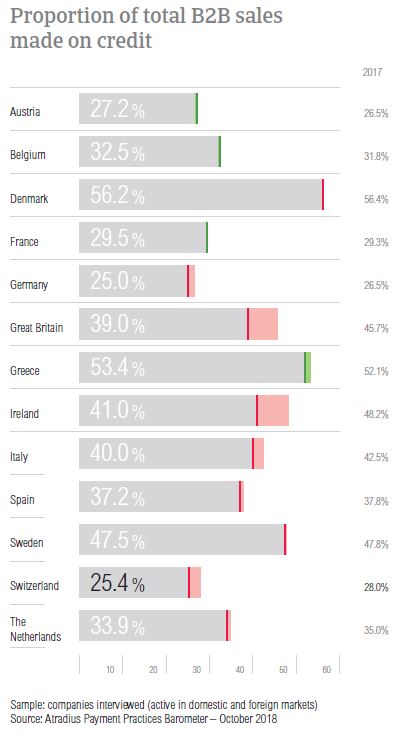 The proportion of total B2B sales made on credit in Switzerland decreased from 28.0% in 2017 to 25.4% in 2018. This is the third consecutive year with a decrease, and Switzerland had the second lowest proportion of sales made on credit in the region. Respondents in the country are far more likely to sell on credit to domestic B2B customers than to B2B customers abroad (29.5% versus 21.2%).

Long-lasting relationships, trust and the desire to expand their businesses are the main reasons why Swiss respondents sell on credit domestically. However, the poor payment behaviour of the customer and the lack of information on the customers’ business or payment performance would prevent respondents in Switzerland from offering credit terms domestically. These reasons were mentioned by 36.2% and 25.5% of respondents respectively.

We trade on credit so that our business can continue growing and developing.

Similarly, Swiss respondents sell on credit to B2B customers abroad if they are trusted customers with whom they have been doing business for a long time. The desire to expand internationally and establish a foothold in new markets was also mentioned frequently. The main reasons why Swiss respondents would not offer credit terms to B2B customers abroad are the lack of information on the customers’ business or payment performance and poor payment behaviour by the customer (mentioned by 37.5% and 30.0% of respondents respectively).

We trade on credit with foreign B2B customers to attract new customers.

25.5% of Swiss respondents expect an increase in DSO

On average, in 2018, 46.5% of invoices in Switzerland went past due. A higher percentage of foreign B2B invoices remained unpaid by the due date. The proportion of domestic and foreign past due B2B invoices has remained stable (46.2% in 2017). 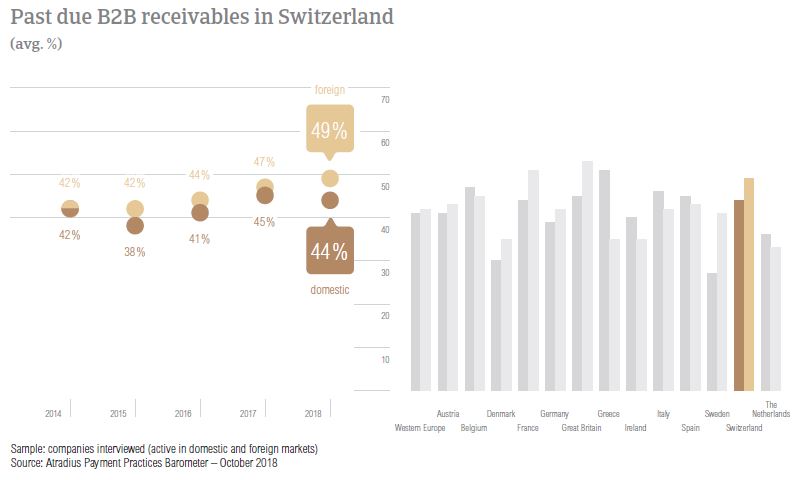 In 2018, the average Days Sales Outstanding (DSO) figure recorded in Switzerland is 36 days, showing no change compared to 2017. Looking ahead, 64.6% of Swiss respondents said that they do not expect any changes in their company’s DSO over the next 12 months. Of those who foresee changes, more respondents expect an increase than a decrease (25.5% versus 10.1%).

Based on the changes mentioned above, the average payment duration in Switzerland decreased from 54 days in 2017 to 48 days this year. This is under the regional average of 56 days.

In Switzerland, domestic payment delays occurred mainly because of insufficient availability of funds and because the buyers are using outstanding invoices as a form of financing. The first reason was cited by 41.2% of respondents, significantly fewer than one year ago, the second by 28.1%, significantly more than one year ago. Payment delays from B2B customers abroad occurred most often because of insufficient availability of funds and the inefficiencies of the banking system (mentioned by 39.8% and 25.3% of respondents respectively).

For 41.2% of Swiss respondents, overdue B2B invoices had no significant impact on their businesses over the past 12 months. However, 23.0% said that they needed to take specific measures to correct cash flow and 21.4% reported lost revenue. 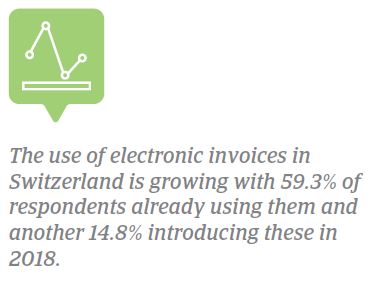 Swiss respondents fear that US protectionism may hamper global growth

Bankruptcy – the main reason for write-offs in Switzerland

In 2018, the average proportion of uncollectable receivables in Switzerland remained stable at 0.9% (1.0% in 2017). This is below the regional average of 1.3%. Domestic B2B receivables were written off significantly more often than foreign B2B receivables.

In Switzerland, uncollectable receivables originated most often from B2B customers in the construction, consumer durables, business services and services sectors. The main reason receivables are written off as uncollectable is bankruptcy. This was mentioned by 67.1% of respondents, a higher percentage than one year ago (60.0%) and the second highest in the region. Other frequently reported reasons for write-offs are the high costs of pursuing the debtors and the inability to locate the customer (mentioned by 30.7% and 28.6% of respondents respectively).

With the rebound of economic growth, business failures are expected to decrease year-on-year in 2018, but nevertheless to remain on an elevated level.

Western Europe: an increase in past due B2B invoices

After a minor increase from 2016 to 2017, the proportion of past due B2B receivables in Western Europe increased again this year and stands at 41.8%.