The survey’s biggest negative change in the proportion of uncollectable receivables was recorded in Denmark; up from 1.3% in 2017 to 1.8% in 2018.

Respondents in Denmark said that payment delays occur most often due to buyers using outstanding invoices as a form of financing. The country had the highest percentage of respondents who reported this in the Western Europe region overall. At 1.8%, the proportion of uncollectable B2B receivables is the second highest in the region and, despite a significant decrease in 2018, bankruptcy remains the main reason for write-offs.

Trading on credit because customers demand it 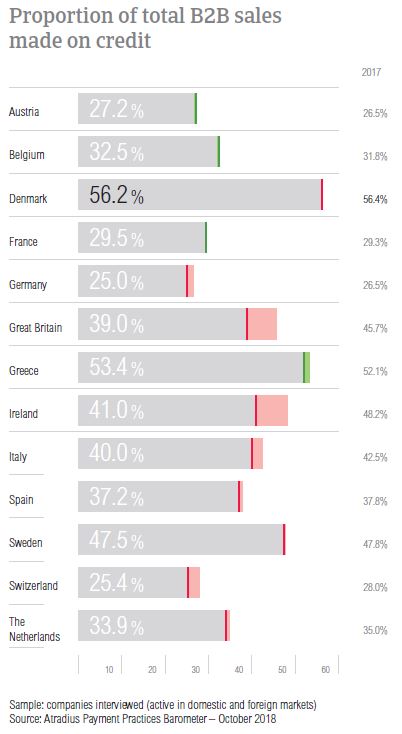 Similarly to what was observed in previous surveys, respondents in Denmark are very inclined to sell on credit terms to their B2B customers. In 2018, the proportion of B2B sales transacted on credit is stable at 56.2% (in 2017 it stood at 56.4%). There is a clear preference for trading on credit with domestic B2B customers over foreign B2B customers. 63.3% of B2B transactions on credit are domestic and a lower 49.0% are foreign.

The main reasons for granting trade credit in Denmark are solid relationships with trusted B2B customers and credit sales as a common practice. Respondents here also mentioned that they sell on credit because their B2B customers demand it and it helps them gain new business, both domestically and internationally.

We grant trade credit because this is our customers’ requirement.

Danish suppliers said that if they were confronted with poor payment behaviour or lacked information on the customer’s business or payment performance, they would refrain from selling on credit to their domestic B2B customers. A very low percentage of respondents mentioned each of these reasons (7.7%) highlighting once more the very open stance to selling on credit. In regards to B2B customers abroad, 36.8% of Danish respondents mentioned that they would not trade on credit if they lack information on the customer’s business or payment performance. 31.6% mentioned that they would not sell on credit if there were high economic or political risks in the customer’s country.

We have long-term customers and granting credit so far has led to successful cooperation.

Lower DSO but 19.1% of respondents expect an increase

In 2018, 79.7% of Danish respondents experienced late payment. Denmark had the second lowest percentage of respondents who reported this and has seen the biggest year-on-year decrease in Western Europe. Payment delays occurred almost as often with domestic B2B customers as with B2B customers abroad (80.7% versus 78.7%). 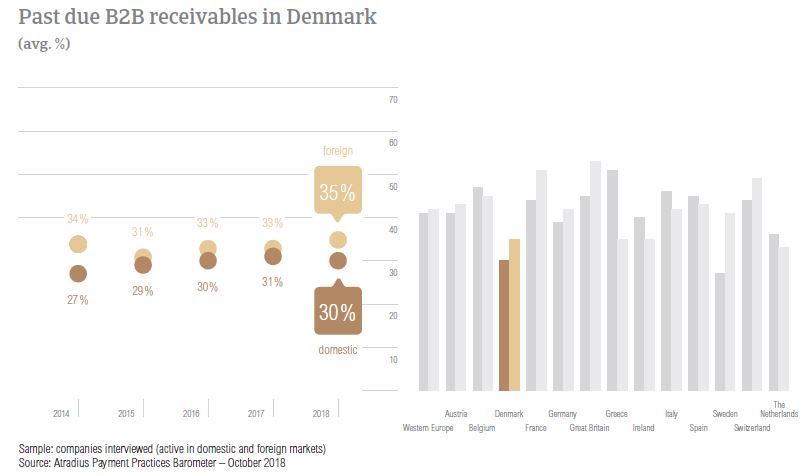 Average Days Sales Outstanding (DSO) of respondents in Denmark is 32 days, one day shorter than in 2017. This is the second lowest DSO figure in the region, after that of Austria, and much lower than the average for the region (44 days). However, 19.1% of Danish respondents foresee increases in their companies’ DSO over the coming 12 months. A slightly lower 14.6% expect deterioration. The majority, (66.3%) do not expect changes over this time frame.

A slightly longer time to convert B2B invoices into cash

Historically, suppliers in Denmark have given their B2B customers some of the shortest payment terms in the region. This is also the case in 2018, when only a small change was registered. Domestic B2B customers in Denmark receive, on average, 24 days to settle payments (23 days in 2017). Foreign B2B customers are also asked to pay within 24 days on average (no change from 2017). 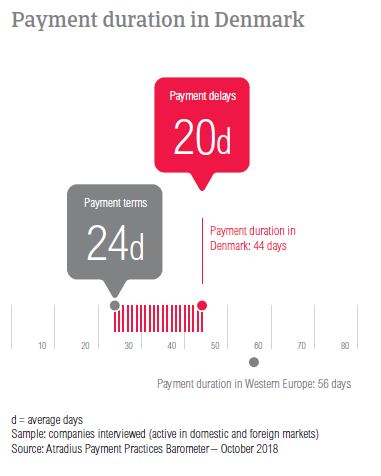 The changes in payment terms and payment delays caused a small increase in the average payment duration. This stands at 44 days and is three days longer than one year ago. Despite the increase, Denmark has one of the shortest payment durations in the region. Compared to their peers in Western Europe, Danish respondents need almost two weeks less to convert B2B invoices into cash.

51.7% of Danish respondents said that overdue B2B invoices did not have a significant impact on their businesses. Of the respondents who mentioned negative consequences, 13.8% said that they needed to take specific measures to correct cash flow and 12.6% that they had to delay investment in property, plant and equipment. 10.3% of Danish businesses lost revenue because of this.

The most extensive use of electronic invoices in Western Europe

After invoicing their B2B customers online, 52.9% of Danish respondents received payments faster. 41.3% of respondents said that electronic invoices did not have a noteworthy effect on payment duration and 5.8% experienced slowdowns in payment. 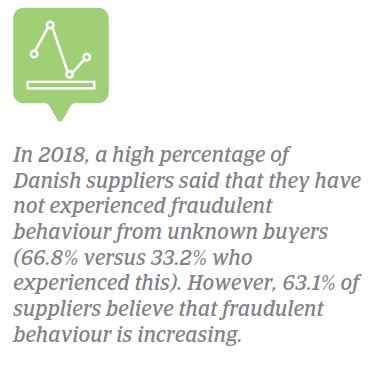 The most significant increase in uncollectable receivables in the region 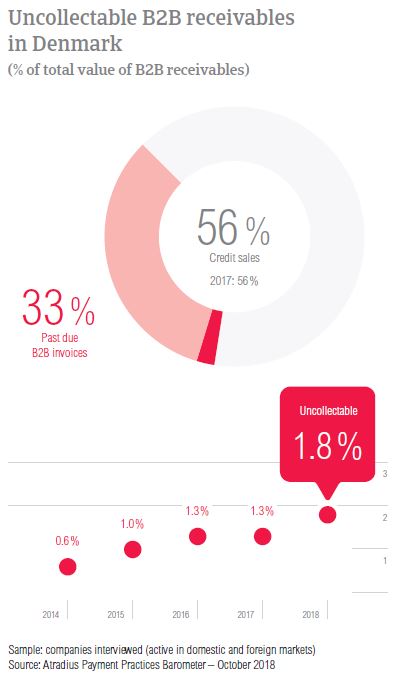 In Denmark, uncollectable receivables originated most often from the construction, consumer durables, electronics, business services and services sectors. The main reason why B2B receivables were uncollectable was bankruptcy. 46.6% of respondents stated this reason, a decreased percentage compared to 2017 (57.4%). Other main reasons for write-offs were the failure of collection attempts (21.4%) and the inability to locate the customer (20.4%).

Consumer durables – a problematic sector in the year to come 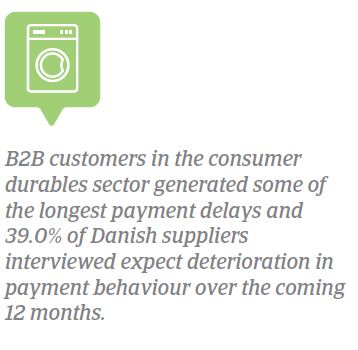 62.0% of respondents in the construction sector and 49.0% in the consumer durables sector said that they do not foresee any changes in the payment behaviour of their B2B customers over the next 12 months. Suppliers in these sectors said that should changes occur, these would probably be for the worse. 23.0% of Danish respondents in the construction sector expect deterioration (versus 14.0% who expect improvement). A high 39.0% of respondents in consumer durables said that they expect deterioration (versus 13.0% expecting improvement).

Having drawn from the expertise of Atradius Collections' local offices, the International Debt Collections Handbook explains the different regulations and procedures for debt collections in Denmark.

Pound sterling depreciation in the aftermath of the Brexit referendum in June 2016 has had significant impacts on UK-EU trade flows.