France: an increase in payment duration

After an increase from 43.5% in 2017 to 47.5% this year, France has the second highest percentage of overdue B2B invoices in the Western European region.

The percentage of respondents reporting late payment by B2B customers increased from 86.0% in 2017 to 88.6% this year. Looking at the average in days, French respondents said that domestic B2B customers delayed payments by 29 days (five days longer than in 2017) and foreign B2B customers by 33 days (seven days longer than in 2017). Based on these changes and the average payment terms given in France, the country saw a steep increase in payment duration. More specifically, French suppliers need on average 65 days, 16 days longer to convert B2B invoices into cash.

Trading on credit to attract and retain customers 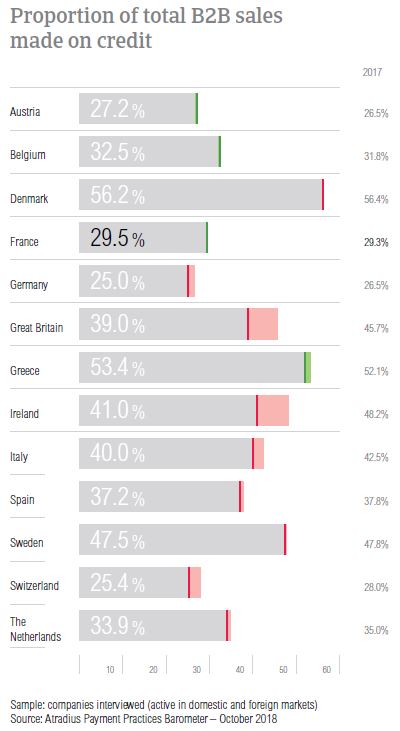 The proportion of total B2B sales made on credit in France is stable at 29.5% after 29.3% last year. This is far less than what was reported for Western Europe overall and shows a similar picture to what was observed in previous years.

When asked why they opted for trade credit, respondents in France mentioned the same reasons in regards to both their domestic and foreign B2B customers: credit sales are seen as a way to expand business domestically and internationally, they are important in nurturing business relationships and developing new ones and it is more convenient to trade on credit.

We trade on credit because this helps boost our customer portfolio.

Looking at reasons why they would refuse to grant credit terms to their domestic B2B customers, 35.6% of French respondents mentioned the customer’s poor payment behaviour, 28.9% the financial weakness of the customer and 24.4% a lack of information on their customers’ business and payment performance. The customer’s poor payment behaviour was also the top reason why respondents would refrain from offering credit terms to B2B customers abroad (mentioned by 36.2%). Other frequent reasons for not selling on credit to B2B customers abroad are the high currency risk and the financial weakness of the customer (each of these mentioned by 31.9% of respondents).

We trade on credit to attract and retain B2B customers.

On average, 47.5% of invoices in France are paid late. This reflects an increase from 43.5% in 2017 and is the second highest percentage of overdue B2B invoices in Western Europe. 50.5% of foreign invoices and 44.4% of domestic invoices are unpaid by the due date.

In 2018, the average Days Sales Outstanding (DSO) figure recorded in France is 42 days, showing no change compared to 2017. Most respondents in France (58.3%) do not expect any changes in their company's DSO over the coming 12 months. Of those who foresee a change, 26.1% expect an increase and 15.6% a decrease.

One of the slowest invoice to cash turnaround in Western Europe

Suppliers in France gave their B2B customers slightly longer payment terms than their peers in Western Europe (on average, 34 days versus 32 days). Domestic B2B customers were given, on average, 33 days to settle invoices (one day longer than in 2017) while foreign B2B customers, 34 days (no change compared to 2017). 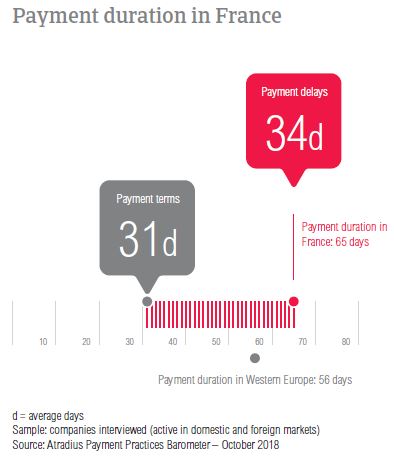 The increase in payment delays, brought changes to the average payment duration, which went up from 59 days in 2017 to 65 days this year. Respondents here take almost one week longer than in 2017 to convert B2B invoices into cash; also nine days longer than at regional level.

In France, domestic payment delays occurred mainly because of insufficient availability of funds and because the goods delivered and services provided did not correspond to what was agreed in contract. The first reason was cited by 35.1% of respondents while the latter by 30.5%. Payment delays from B2B customers abroad occurred most often because of the inefficiencies of the banking system and the complexity of the payment procedure (mentioned by 27.7% and 29.4% of respondents respectively). 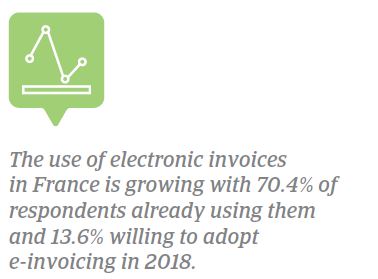 The majority of respondents in France (70.4%) are already making use of online invoicing (e-invoicing). Only 16.0% said that they do not invoice their domestic and foreign B2B customers online. The remaining 13.6% are introducing them in 2018.

Asked about the effect of e-invoicing on payment duration, the majority (60.0%) believe that after invoicing electronically, they received payments quicker. In contrast, 6.7% said that they have experienced the opposite, slower payments and 33.3% said there was no noteworthy effect on payment duration. 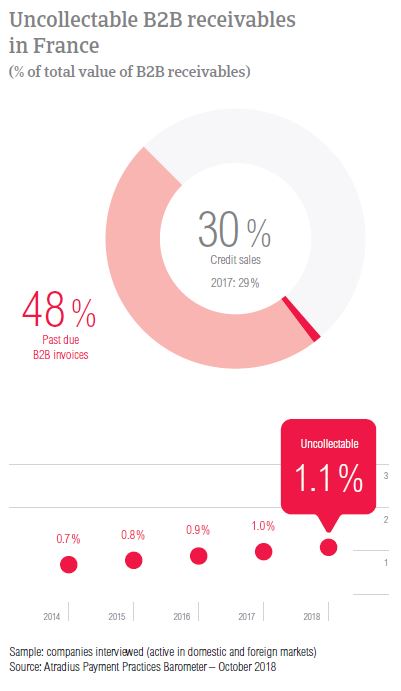 In 2018, the average proportion of uncollectable receivables in France remained stable at 1.1% (1.0% in 2017). However, it seems to be on an upward trend since 2014. Domestic B2B receivables were written off significantly more often than foreign B2B receivables.

Uncollectable receivables originated most often from B2B customers in consumer durables, construction, business services and services. The customer going bankrupt or out of business – was also the main reason for write-offs in France (mentioned by 56.3% of respondents). This is a common problem in the entire region. The second most frequently reported reason for write-offs is the inability to locate the customer, mentioned by 30.3% of respondents.

B2B customers in the construction and consumer durables sectors generated some of the longest payment delays. B2B customers in these sectors, paid on average 37 and 33 days after the due date. The main reasons behind the payment delays in the construction sector are insufficient availability of funds (reported by 44.0% of respondents), the buyer using outstanding invoices as a form of financing (mentioned by 36.0%) and the formal insolvency of the buyer (36.0%). In the consumer durables sector, 40.0% of respondents cited insufficient availability of funds, 36.0% disputes over the quality of goods and services provided. Another 36.0% of French respondents said that late payments occurred because of the formal insolvency of the buyer. 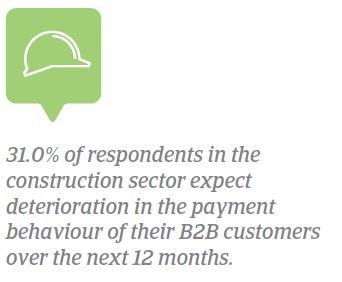 Looking at the coming 12 months, most respondents in France (45.0% and 52.0% respectively) do not foresee any changes in the payment behaviour of their B2B customers in the construction and consumer durables sectors. Should a change occur, most respondents in these sectors expect deterioration.

Despite the ongoing upturn, automotive suppliers at the lower end of the value chain face elevated debt levels, strong competition and price pressure.

Having drawn from the expertise of Atradius Collections' local offices, the International Debt Collections Handbook explains the different regulations and procedures for debt collections in France.